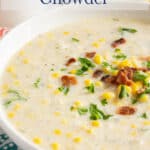 Fresh Seasonal Corn turned into a delicious Corn Chowder! This chowder is creamy, comforting and packed full of flavor!

Made with fresh corn on the cob, bacon and a bit of jalapeno just to give everything a little kick!

Why make this recipe

Fresh corn is in season! It seems to be everywhere right now. The grocery store bins are overflowing with fresh corn and the farmer's market is well stocked  too.

Corn chowder is a delicious soup that is perfect during the summertime and this recipe takes full advantage of the very best corn on the cob available!

The creamy soup is made with a just a bit of jalapeno that offers just a touch of heat. It's not spicy and you can control how much to add.

Removing the corn from the cob

Use whole corn cobs. Shuck the husk and then cut off the kernels. This is easy, but is always a bit messy for me. The corn likes to fly off the cob while cutting it.

To remove the kernels, cut the bottom off the cobs making a flat surface. Then stand the cob upright. Take a sharp knife and slice down the cob just under each kernel.

Don't worry if they aren't perfect. It's all going into a pot of soup and no one will examine every kernel.

Don't get rid of the cobs after you cut the corn off. Two of the cobs go into the soup. This just adds more flavor to the corn chowder.

There's a lot of creaminess and flavor left in those cobs. If your cobs are too big to fit in your pot, just snap the cobs in half.

Can I use frozen corn?

This chowder highlights the very best fresh corn on the cob. However, it might not always be available. When fresh corn isn't in season, you can substitute frozen corn. You'll need about 4 cups of corn. Buy the small, petite corn which have smaller kernels and are often a bit sweeter.

Can I freeze this chowder?

This chowder can be frozen, but it freezes best if it's frozen without the added milk and cream. Once thawed and reheated, the milk and cream can be added.

This homemade corn chowder is the star of a meal. Serve it with homemade cheddar beer bread or buttermilk biscuits.  For dessert you might want to serve homemade peach ice cream! 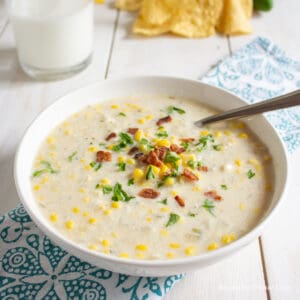 This post was originally published in July 2016. The recipe and some of the pictures have been updated.