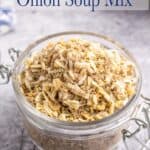 Whip together your own homemade onion soup mix to use in soups, sour cream dips or adding as a flavor boost to recipes.

This easy to make spice mix is made with just a few simple ingredients and will last in your pantry for one year!

Make your own soup mix

I have to admit, onion soup mix is a staple item in our pantry. Up until now, I have always bought the little packets from the store. But now I have a perfect recipe to replace the store bought stuff!

Making your own means you know what's going into the soup mix. I did purchase beef bouillon granules and after reading all the ingredients on several different brands of bouillon, I picked out one that works for me.

The bullion or broth base I used was from Orrington Farms and is pretty readily available in most grocery stores. I like this brand because it is gluten free and minimal on the additives. They also have a low sodium variety you can choose.

You can use any brand you'd like, but do get a powdered or granular broth, not cubes or a paste.

We like to use this onion soup mix for making sour cream dip. It's so easy, and talk about flavor! It's perfect for any chip, veggie or cracker.

This recipe makes a large batch so you can easily store in your pantry and have it ready for whenever you need it. One packet of store bought soup mix is equal to ¼ cup of this homemade soup mix.

This is called a soup mix, but it's also a spice mix! It can be added to so many different recipes to give a punch of flavor!

This soup mix is similar to Lipton soup mix although it's not as salty tasting as the store bought version.
You can use this homemade version in any recipe calling for Lipton onion soup mix. ¼ cup of the mix equals one packet.

This soup mix will last for up to one year.

To use onion soup mix

Use this soup mix in any recipe calling for onion soup mix. You'll need ¼ cup of the mix for a packet of store bought mix.

Be certain to check out all my delicious recipes! 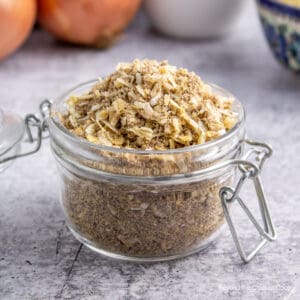 ¼ cup of the mix equals one packet of store bought mix       This recipe yields approximately 1 ⅓ cups of mix.