The fragrance from homemade pickling spice is warm and enticing. Made with different spice seeds, ground ginger, a cinnamon stick and a bit of heat from a dried pepper.

Use pickling spice in homemade pickles or homemade pastrami.

Why make your own spice mixture

Pickling spice is easy to buy at the store and it's already mixed up. So why make your own? The cost of a 4 ounce jar costs more than $4. If you only use it once, that might be worth it.

Lately I've been using up the pickling spice and decided I needed to make my own. Not only am I saving money, I get to add exactly what I'd like. Not all pickling spices are the same.

I've used this spice mixture in pickled green beans, green tomato relish and when I made venison pastrami.

Because every pickling spice recipe has a bit of variety, this gives you some room to add or subtract different spices. You'll want to keep the mustard seeds, black peppercorns, bay leaves and pepper as the base.

Some additional spices to add include:

You can also adjust the amount of spices in this recipe. Add another cinnamon stick or a couple more bay leaves.

Each time you make this mixture, play around with the ingredients a bit and find your perfect blend.

How long will pickling spice last?

Stored in an airtight container, pickling spice will last for several years. As long as it stays dry, it won't go bad, but the intensity of the flavors may begin to diminish.

If you like making your own blends, you'll also want to check out these recipes: 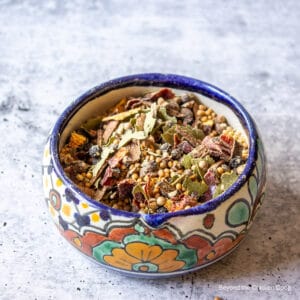 Recipe yields approximately ⅓ cup. Additional spices to add include: You can also adjust the amount of spices in this recipe. Add another cinnamon stick or a couple more bay leaves.