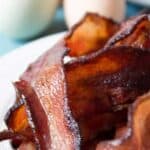 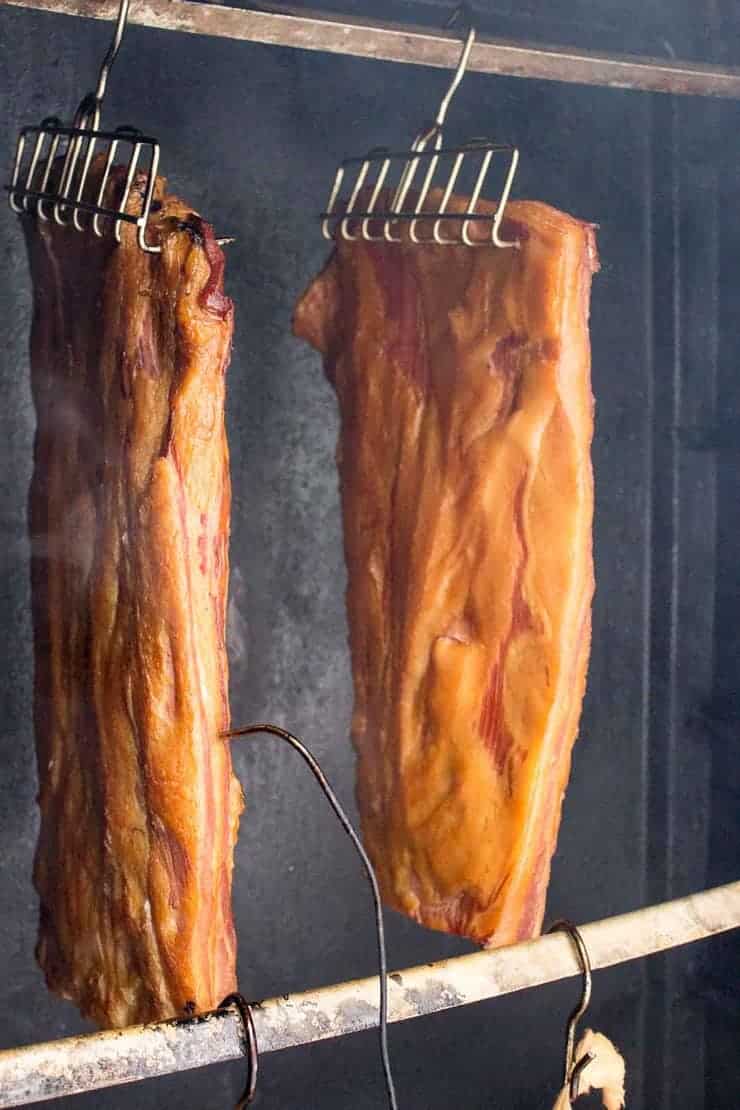 Are you ready to make some bacon? Have you wondered how to cure bacon at home?

I'm not just talking about cooking up some slices of bacon. Nope, I'm talking about homemade bacon that starts with a slab of meat that is rubbed with a cure, smoked, sliced and then cooked.

Rod has been making homemade bacon for years. We raise our own pigs and he does all the butchering each fall.  That time of year is usually crazy busy for us and there's no time to cure and smoke bacon or ham or make homemade sausage.

Rod usually cuts, grinds and wraps up the meat and freezes it until the end of winter or beginning of spring when he has time to create his masterpieces!

Table of Contents show
How long does it take to make your own bacon?
How do you make homemade bacon?
How is applewood bacon made?
What type of wood can be used for smoking bacon?
What temperature do you heat bacon to in the smoker?
Notes on Making Homemade Bacon
How to Freeze Bacon
Recipes Using Bacon
Homemade Bacon

How long does it take to make your own bacon?

This process takes several days, but in the end we have enough bacon to last us several months.

You don't have to raise your own pigs to make your own bacon. You can buy meat from your local butcher. You want a bacon cut or belly from the pig.  It probably won't be in the display case, but most butchers can get it for you - just ask! 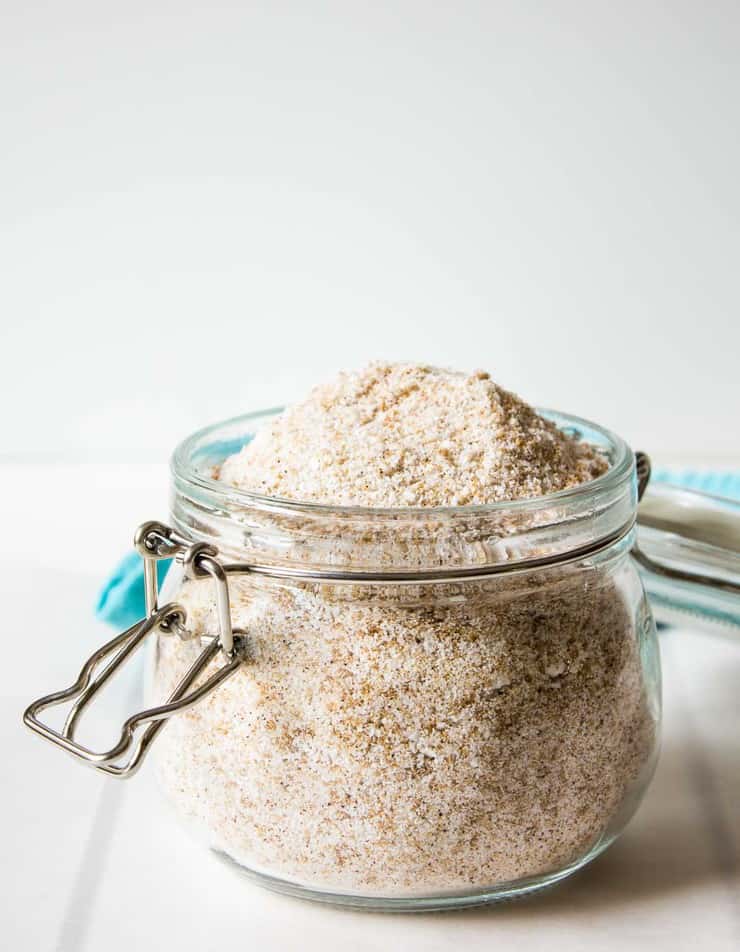 How do you make homemade bacon?

Step One: Make the Rub

First step is to make the rub. This is a mixture of salt, seasonings, sugar and cure.

The rub is sprinkled over the meat and massaged into the meat. This dry rub marinates the bacon for 4 -6 days. 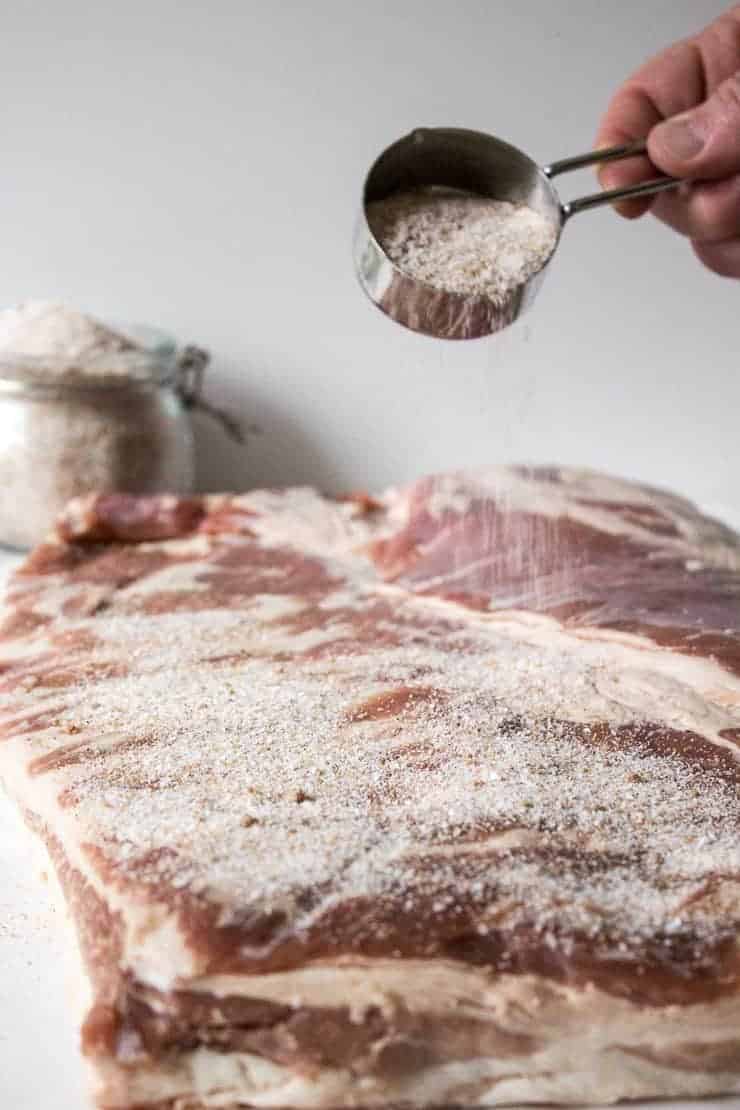 The meat is rinsed and then soaked in water for 2-4 hours. The soak helps remove the excess salt. After 2 hours, Rod slices off a bit of the bacon, fries it up and tastes it to determine the saltiness.

Keep in mind there isn't any smoke yet. If the bacon still seems too salty, soak for another 1-2 hours in a fresh batch of water. 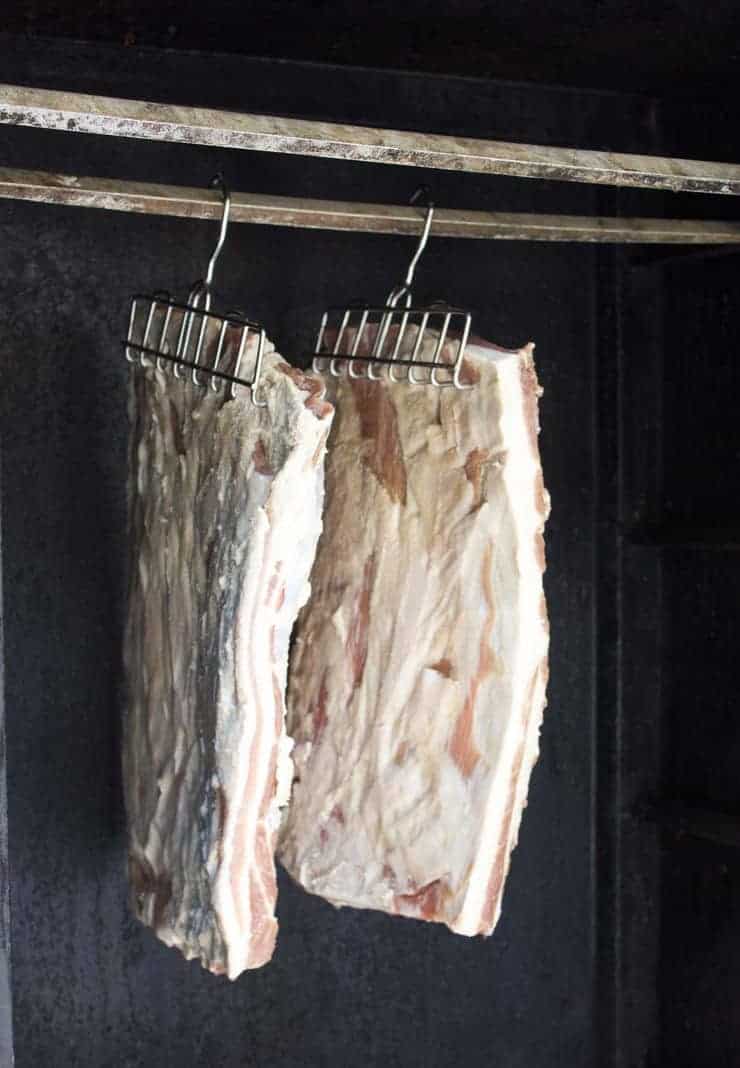 Next comes the smoking. Rod uses a homemade smoker that he built, but you can use almost any type of smoker. He hangs the bacon with bacon hangers.  If your smoker doesn't have space for hanging, you could lay your bacon flat.

Preheat your smoker to 180-220 degrees prior to hanging bacon. Rod doesn't add smoke right away. He hangs with just heat until the internal temperature of the meat is 80-90 degrees.  He then begins adding smoke. Rod usually makes applewood bacon.

How is applewood bacon made?

The type of wood used flavors the meat and creates a unique flavor. Rod usually uses applewood for smoking bacon.

What type of wood can be used for smoking bacon?

Beside applewood, there are several types of wood you could use including hickory, maple, mesquite and alder.

Rod smokes the meat until the meat becomes lightly browned. He then stops the smoke, but keeps the bacon in the smoker with just heat until they reach an internal temperature of 135 degrees. 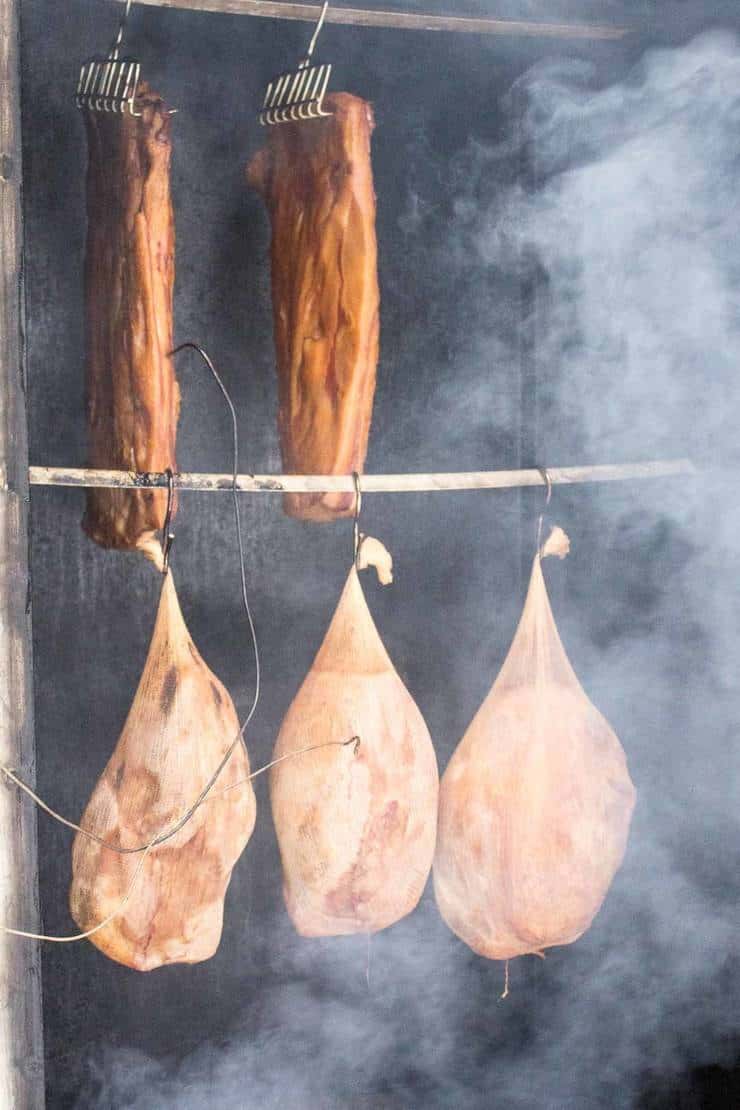 We typically will make our bacon and ham at the same time. Rod actually uses the exact same salt rub on the hams as the bacon. I never even knew that until I wanted information for this blog post!

Making ham is very similar to making bacon, although the hams do go through a brining process prior to the rub. The timing and temperatures are different. I'll share how to make homemade ham sometime in the future. 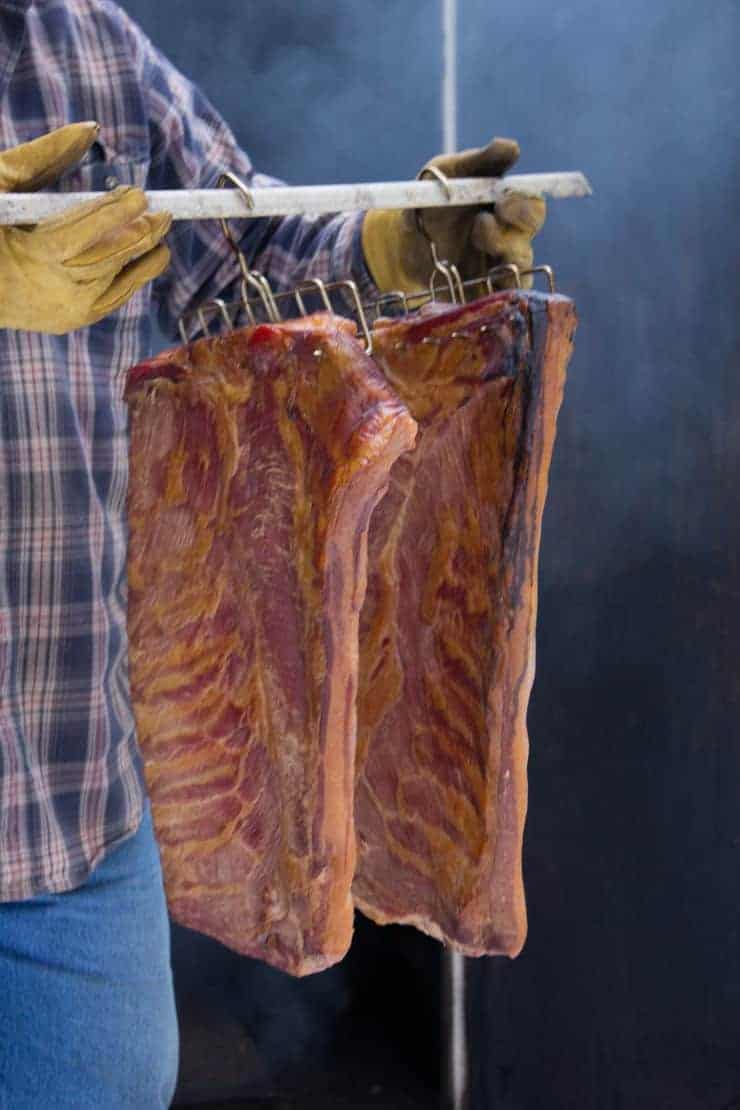 What temperature do you heat bacon to in the smoker?

When the bacon reaches 130 degrees, they are removed from the smoker. Rod hangs them in our unheated shop (when it's cold)  until they are cooled. You want to hang your meat in a refrigerator or cool area that is at least 40 degrees at all times.

Our shop stays about 30 degrees during the winter and early spring. You could also refrigerate them, which we've had to do from time to time.

The last thing to do is slice it all up! We package our sliced bacon and freeze it until we are ready to use it. 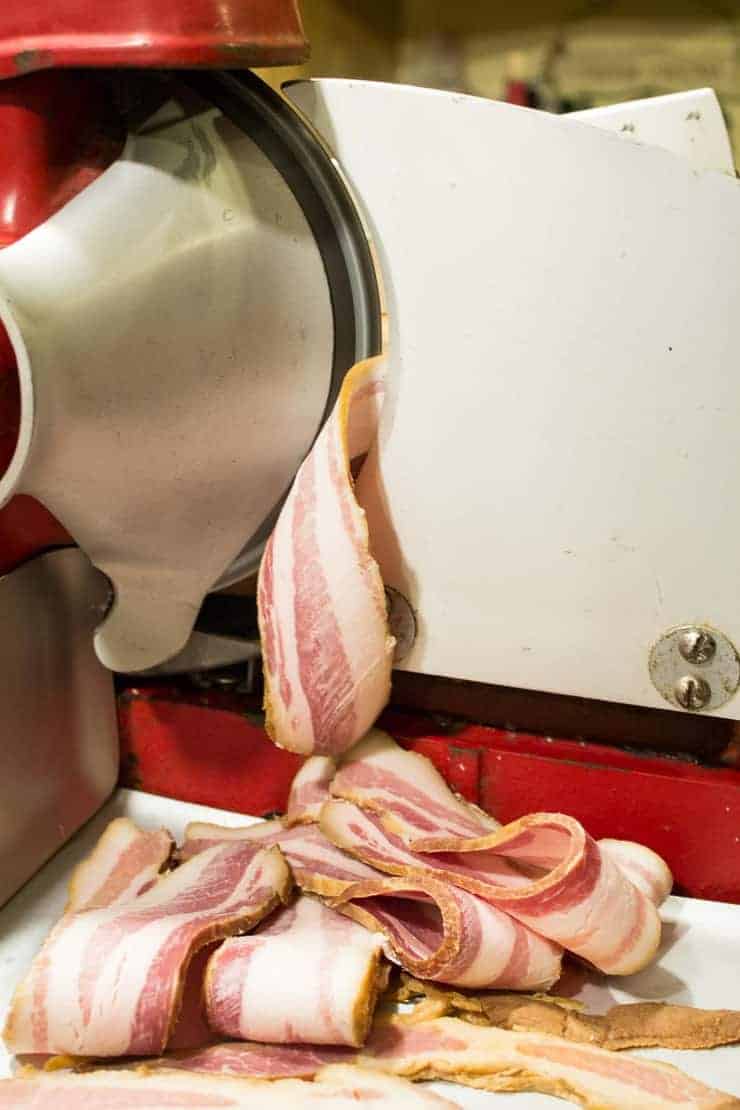 How to Freeze Bacon

Another great homemade recipe is this venison pastrami.

Be sure to check out all my delicious recipes!