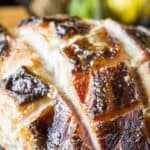 Baked Ham with Citrus Glaze is a delicious recipe for making a holiday ham. The delicious glaze is made with orange juice, mustard, brown sugar and ground cloves. 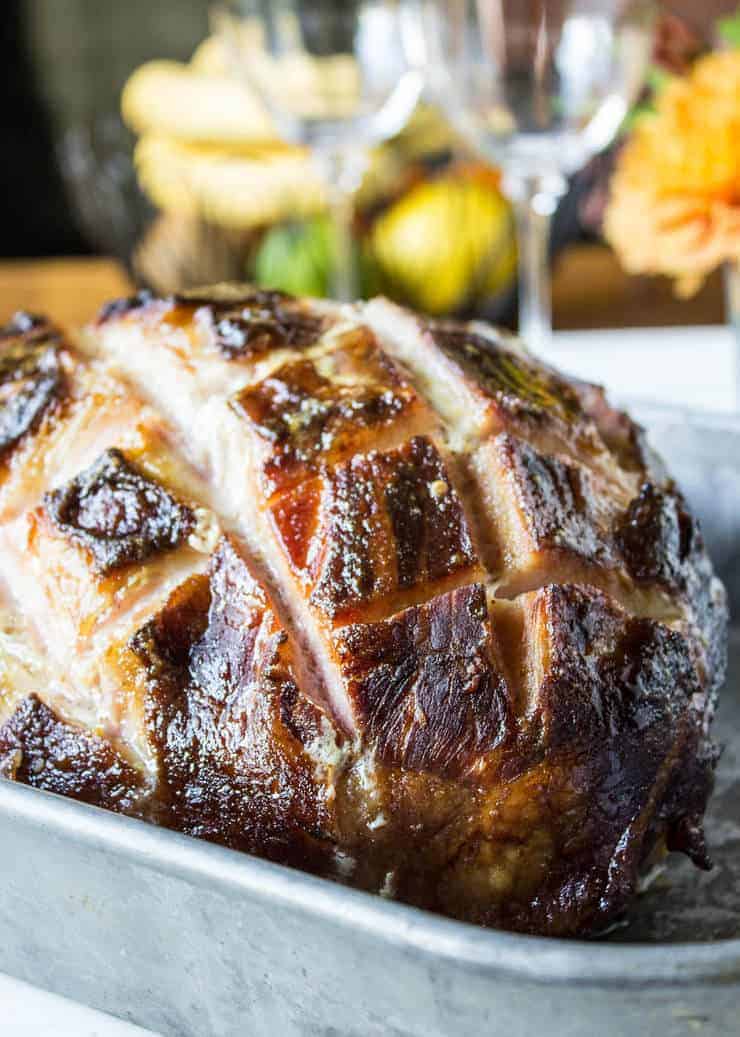 Why are hams only saved for the holidays?  Maybe because a ham is so big?  We like ham, but it does seem like an event we have to plan for.

A few weekends ago I baked a ham.  Of course that meant we had ham for Monday, Tuesday, Wednesday, Thursday, and Friday.  That means I'm using this leftover ham in many different recipes. Check out this collection of leftover ham recipes, if you need some inspiration.

Maybe that's another reason I don't bake one very often.  I like that a ham provides leftovers, but I do have to get creative with how to use it up. 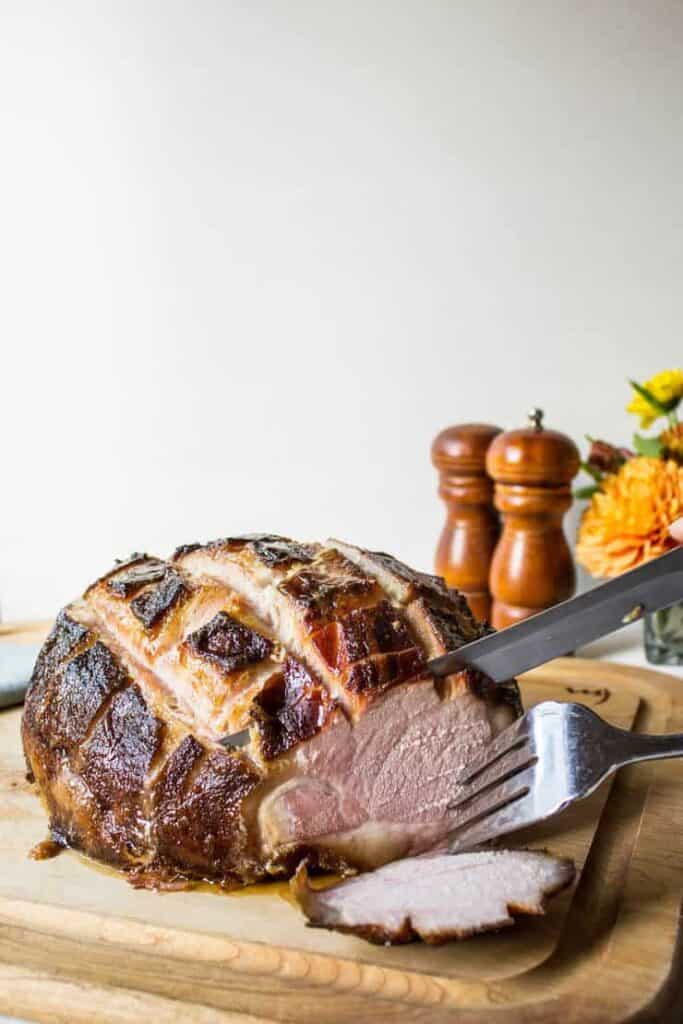 We raise our own pigs and process our own meat.  Rod also has a smoke house and cures and smokes hams and bacon.  Because hams are so huge he has begun to cut them down to more manageable sizes. The ham for this recipe was just over 7 pounds.  Whatever size ham you have, this process will work.

My ham was a bone-in ham, but again, you can use one without.  The only difference will be the baking time.  You will know how long to cook based on the temperature of your ham. 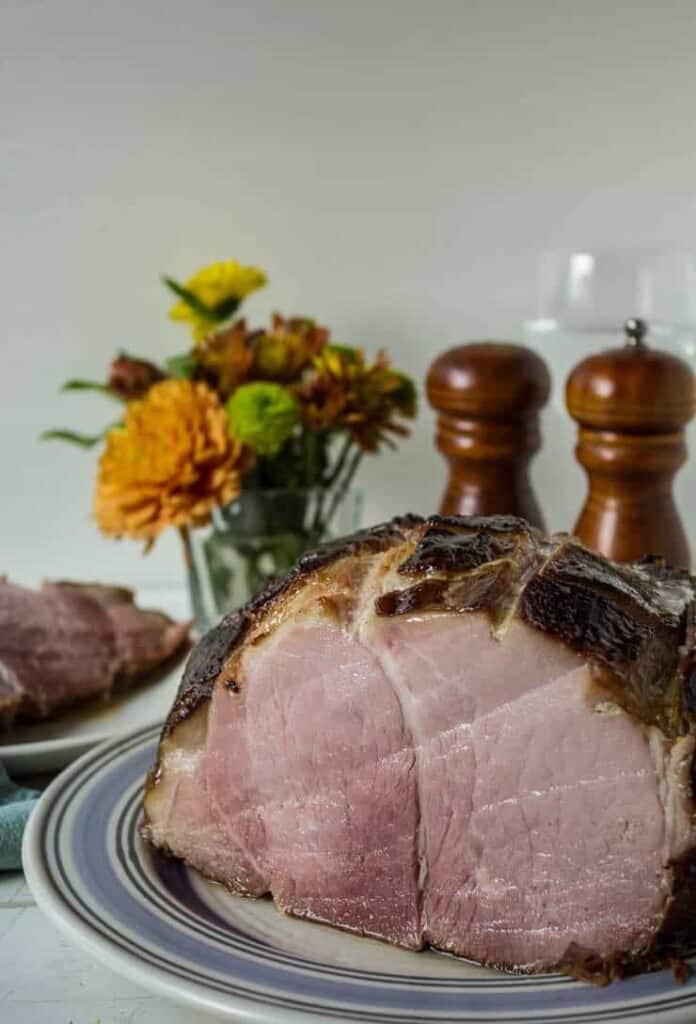 How to bake a ham

When you are baking a ham, you need to keep in mind that most are fully cooked (check the label to see if yours in fully cooked.)  With a fully cooked ham, all you are really trying to do is warm the ham, and add a tasty glaze.  The only true danger is a dry ham.

I cooked this ham in a 325 degree oven for 3 hours.  The ham was placed in a glass baking dish with the skin side up.  The skin needs to be scored.   I lightly tented the ham with foil.  You don't want to seal the foil because then the ham just gets steamed.  For the first hour I did nothing.  Then I started checking it.

I was making certain the drippings on the bottom weren't burning and that the ham was  looking good.  When the drippings are getting really dark with little moisture left it's in danger of burning.

While the drippings won't be used, it does stink and stink on the bottom can ruin the taste of the ham.  When dry, I add a cup of water, or just enough for a thin layer of water.  Be careful with adding water to a hot glass pan! The pan can crack.  I try to add warm or hot water to avoid a cracked dish.

How long to bake a ham

I cooked this ham for 3 hours. Your baking time will vary depending on the size of your ham.

With a 7 pound ham, I also start to take an internal temperature after two hours.

Keep a close eye on the ham.  You don't want your glaze to burn.  Watch until it reaches 130 degrees and remove from the oven.

The glaze is made with orange juice.  I used fresh squeezed because that is what I had on hand.  Any kind of orange juice will work.

The glaze adds a wonderful caramelized color and a flavor that enhances the smokiness of the ham.

What to serve with a baked ham?

I like to serve this ham with Green Bean Almondine, Potato Galette, Homemade Dinner Rolls and at Easter time I include Classic Deviled Eggs. We also like to serve a sweet and spicy mustard for those who like to dip their ham!

If you loved this recipe you'll LOVE all the others in this category. Check out all my main dish recipes! 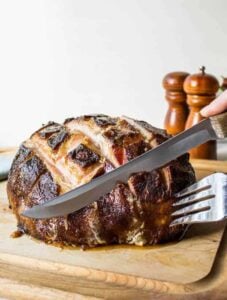