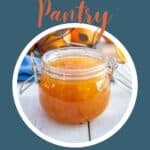 In episode 31, Kathy shares her recipe for making orange marmalade.

Table of Contents
Play the episode
Recipes
In this episode you'll learn:
Where to listen to the podcast
Transcript

Recipes mentioned in this podcast:

Hello everyone. Welcome back to the Pantry.

One of the things I love about orange marmalade, oranges are ready in the middle of winter, and so I don't have a whole lot of canning projects that I do in wintertime, but I do make orange marmalade in winter and I either can or freeze the orange marmalade. So either way works. Whatever you're most comfortable with or whatever you have the most space for.

With orange marmalade I use navel oranges, but you can use almost any type of orange that you like. This recipe uses orange peel, orange pulp, and sugar.

The first thing you're going to do is rinse off your oranges really well. And then I take a vegetable peeler and I peel off just the outer layer of that very thin layer of the orange peel.

I don't want that thick white layer, the pith in my orange marmalade. Now a little bit's going to stick to the peel, and that's okay, but I don't want that really thick white. In this recipe in the post, I have some step-by-step photos that shows you exactly how I do this. So make sure that you refer back to it for the recipe and for those photos so you can see exactly how I make this orange marmalade.

So the first thing I do is peel those oranges and then I cut up that orange peel fairly small. I like nice, very, very thin little strips, but I like my orange marmalade to have a little substance to it. So I leave them nice and long. You can cut them up as small as you'd like though, especially if you don't care for that texture in the orange marmalade.

Then we drain that water off and we do it again. We put fresh water in and we boil it for five minutes, and then we add the pulp and six more cups of water and we boil for five minutes. Now, once we've added the pulp, We don't drain it off anymore. That water that's in that pot with the pulp and the peel and the peel is all going to be left in there.

We take it off the heat and I just lightly put something over it so nothing gets into it. And we let that stand at room temperature for 12 to 18 hours or overnight. In the morning, I take that cover off and I bring the mixture back to a boil, and I boil it for 30 to 45 minutes until that peel has really had a chance to soften.

Turn my heat down to low and I add the sugar one cup at a time, stirring to help to make sure it dissolves and it it dissolves in there evenly. I continue cooking it until it reaches the gelling point, which is about another 30 to 45 minutes. . Once your jam has reached the gelling point, you're gonna remove it from the heat ladle it into your jars.

Half pint jars is what I usually do, but you can use pint jars as well, and either you're going to let it cool and then freeze your jam. Or if you're going to, can it leave a quarter inch head space, wipe down your rims, put your lid and your rings on, and then you're going to hot water bath that for 10 minutes, but adjust for your altitude.

Now let's talk a little bit about the gelling stage. There are three main ways to test whether your jam has reached the jellying stage. There's a spoon test, a plate test, and a temperature test. I actually sometimes do all three because I like the spoon test because you're already stirring your jam and you just pick it up and you tilt it to the side and let the jam fall off, and you're looking for when the jam starts to become a sheeting action where it all kind of just sloughs off the spoon.

The plate test is probably my favorite test. You have a small plate that's being chilling in your refrigerator when it cold and when you think that jam is set.

So when it has hit, reached, that spoon test, you place a little bit in the center of the jam of the jam on the cold plate. You wait a minute, just take your finger or even the back of your wooden spoon and draw a line through it. If the jam holds its shape, the jam is set.

If you're going use the temperature test, you're thinking your original point is 220 degrees Fahrenheit. If you're above a thousand feet, deduct two degrees for every thousand feet. So I'm at about 2000. So I look for my jam to set between 216 and 218. I will look a little early just in case.

Orange marmalade not only tastes great, but the color of it just looks like sunshine, which is just what we need in these dark winter days. Let me know if you have any questions. Give it a try and get going with that jam. I'll see you next week in the pantry. Bye.

Thanks for listening, and be sure to tune in again next week for more episodes of Preserving the Pantry.