How to install a new package of honey bees - Honey Bees starting a new hive! 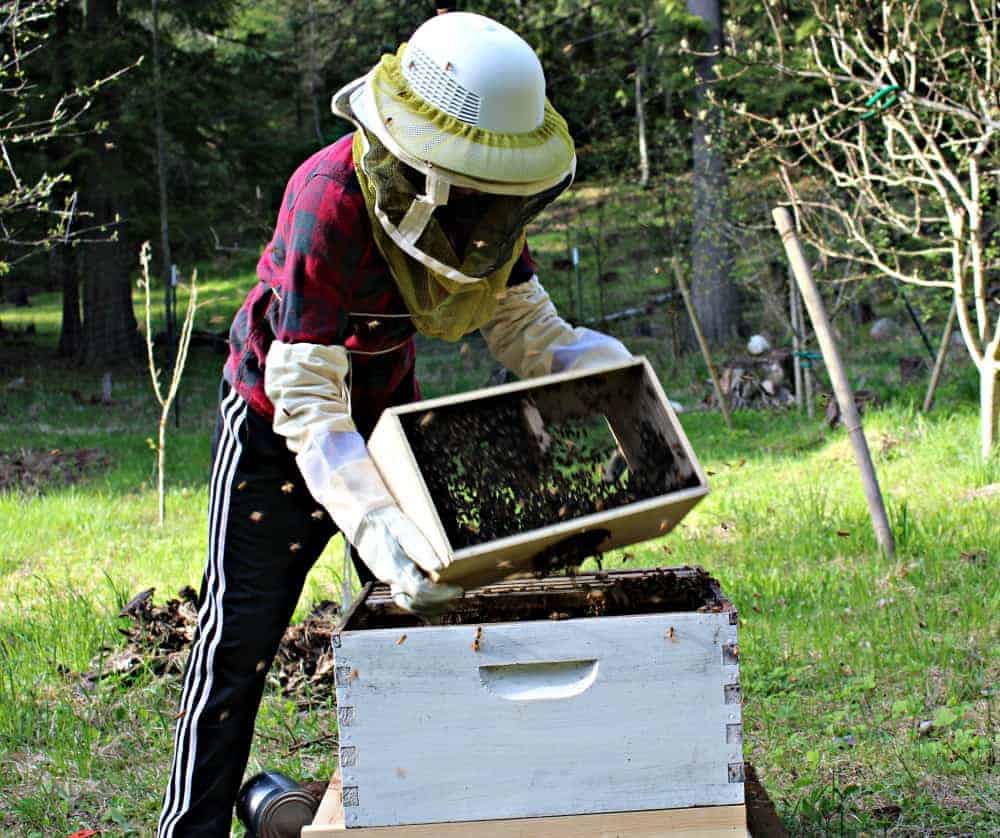 I am still new to honey bees and am still learning the ropes.  We just received two new packages, or colonies of bees.  This is how we installed the bees into their new hives. 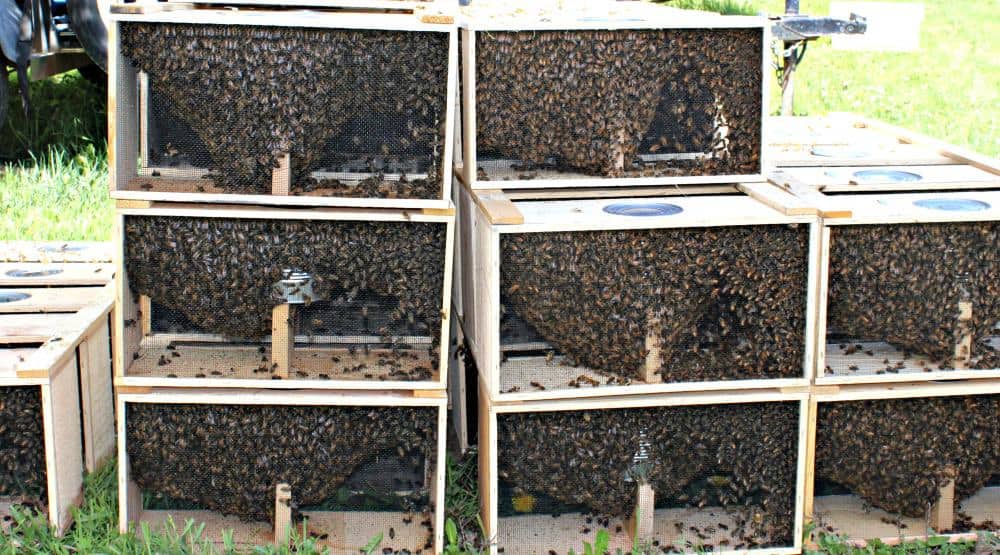 We ordered our bees and pick-up day was this weekend.  We had to travel 100 miles to pick up our bees.  The bees come in a screened box with a can of sugar water and one queen bee contained in a smaller screened box. We were so excited to pick up our bees...but then we had to drive 100 miles back home....in a car....and hope the bees wouldn't get out!  Luckily, the boxes held tight! 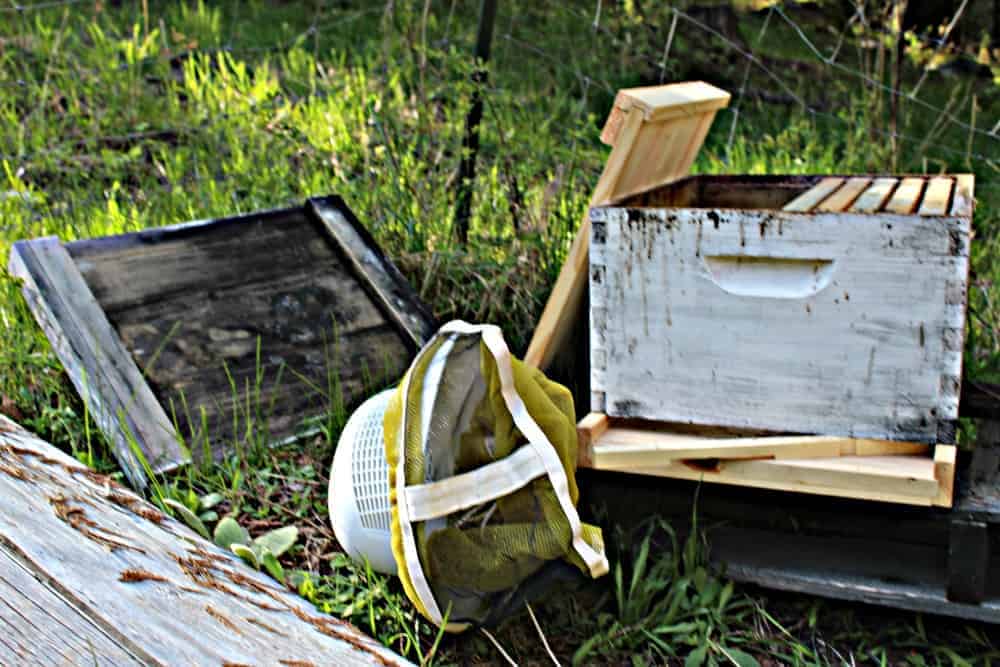 I've had honey bees before.  At the end of last summer, my bees swarmed (flew away and found a new home) and I was left with empty hive boxes.  My bees left behind beautiful honeycomb on the hive frames.  We pulled out the frames, examined for mold and removed any that looked pretty heavily covered with mold.  The rest of the frames went back into the boxes.  This is a head start for the new bees. The frame below was good to go back into the hive for the new bees. 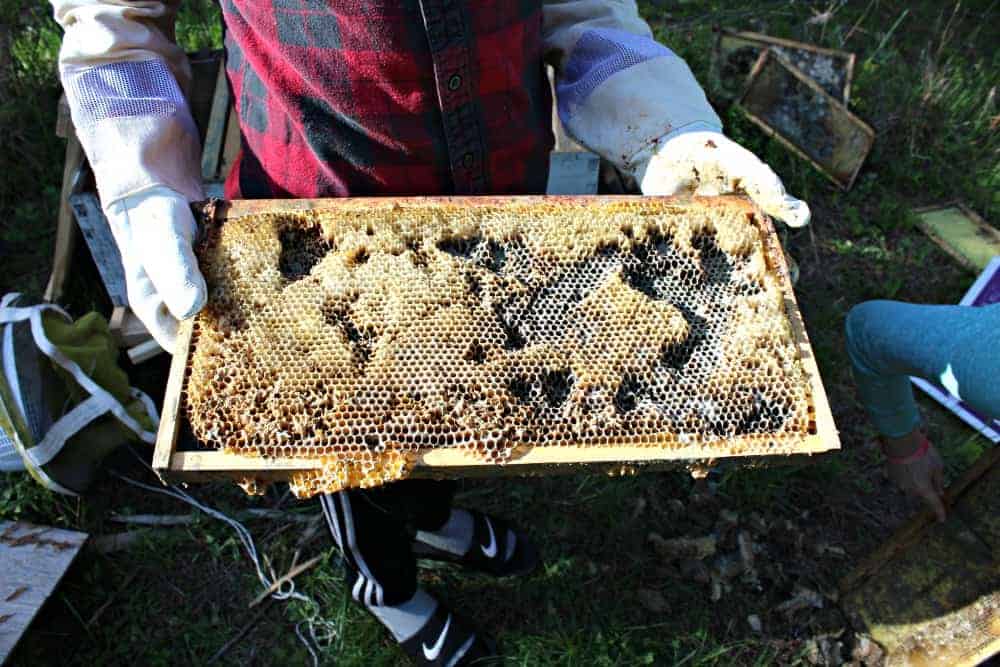 Once our hives were ready, it was time to get the bees out of their box!  The first step; prying the can of sugar syrup out of the box.  Directly to the right of the can is a metal tab.  This tab is attached to the small box holding the queen! 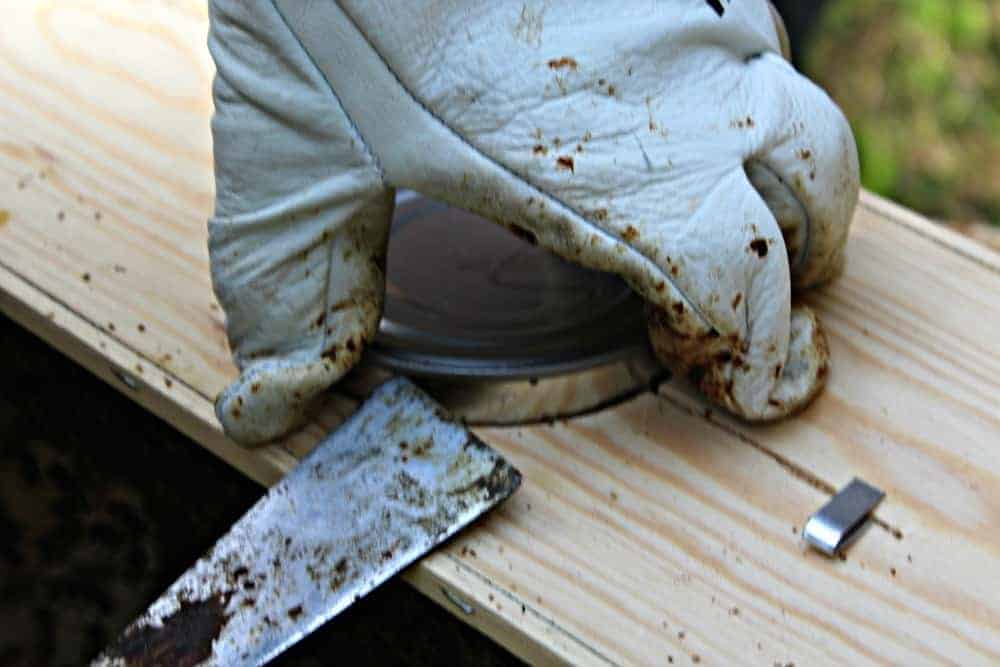 Next, remove the queen!  She's in that little box.  The bees are trying to get to her.  During transport she is in a small screened box with a cork in one end.  We gently brushed off the bees and used a pocket knife to dig out the cork.  The trickiest part is not letting the queen out!  She has to stay in.  The queen determines what happens to the entire bee hive.  She has to be in the hive long enough for her scent to be there and for everyone to determine it's a good hive.

As soon as we pull the cork, we plug in a mini marshmallow. The marshmallow is a stopper to keep her in. The other bees start eating the marshmallow. After a day or two, they will have eaten through and release the queen. That's enough for the bees to know this is their new home. 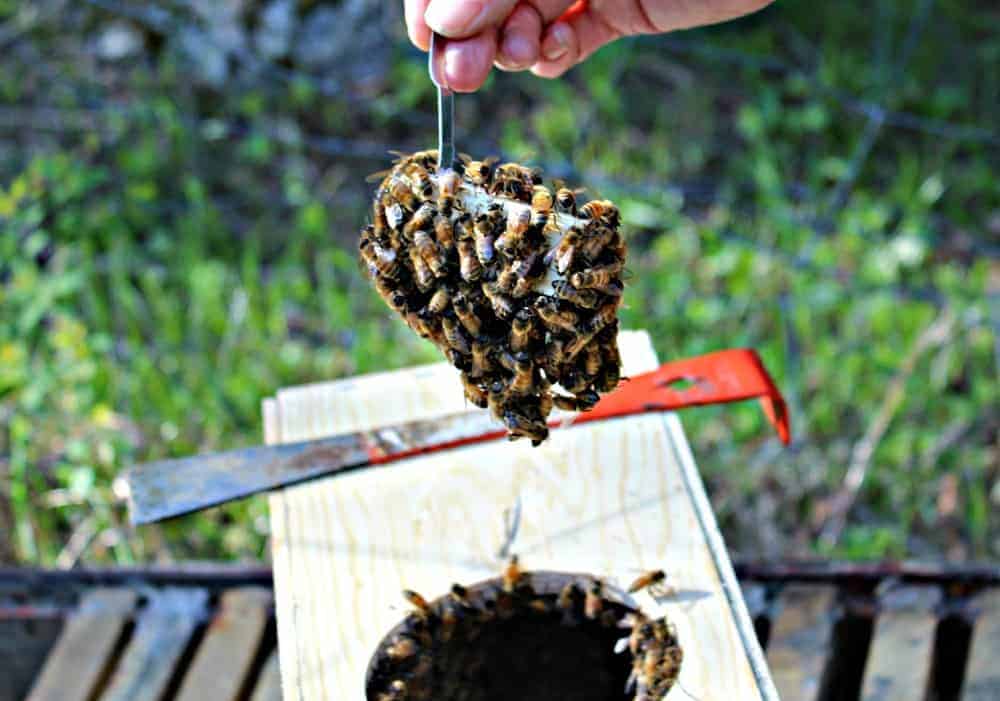 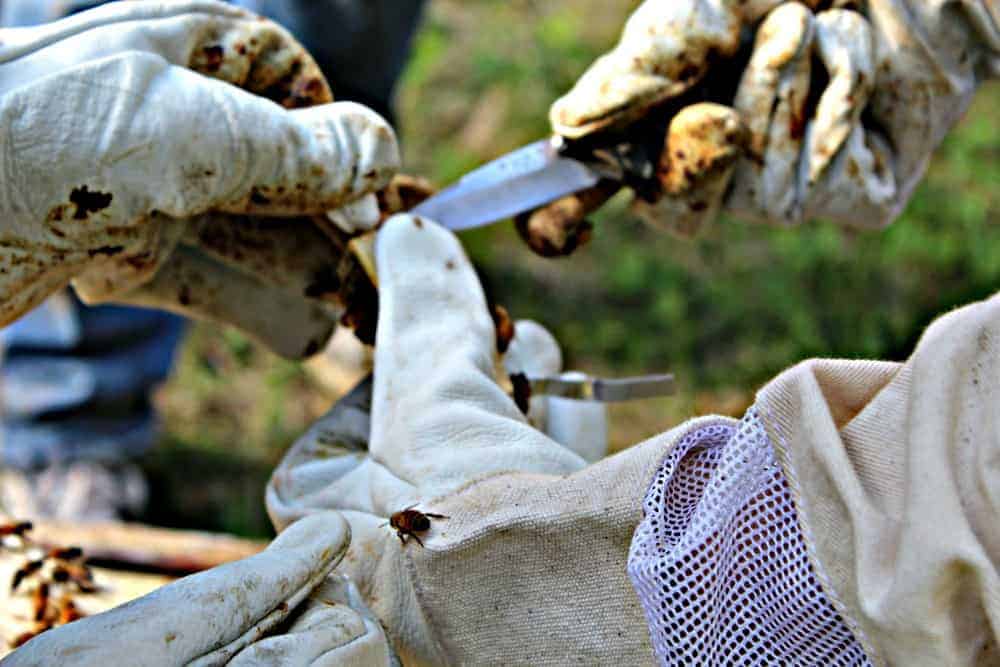 The final step is shaking the bees out of the box.  Yep, this is a little scary!  The thing to keep in mind is the bees aren't aggressive at all right now. They aren't trying to protect their hive or their honey, because they don't have any yet. They are disoriented and trying to release their queen. Still, just before we shake we take a deep breath and hope all goes well. 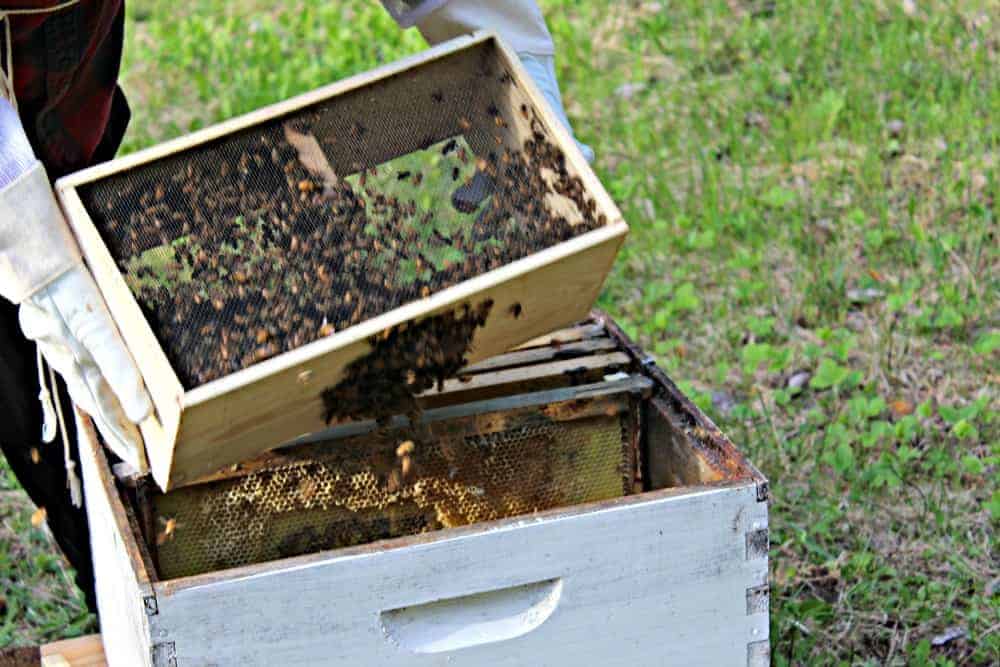 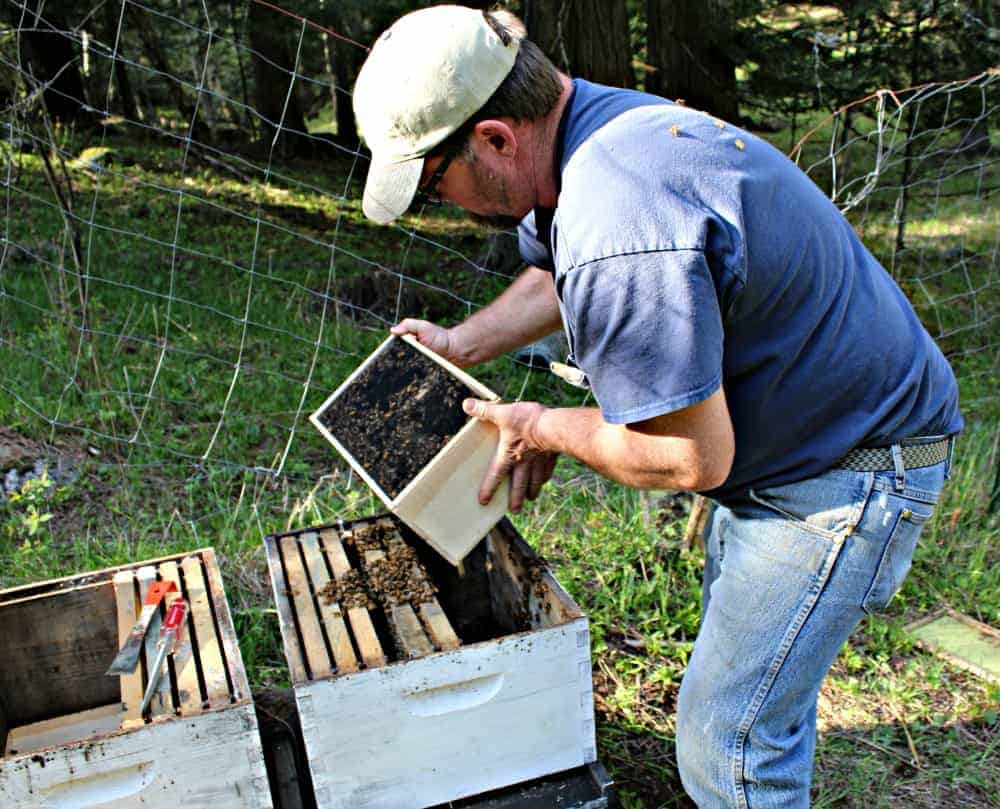 The bees do fly all around.  The hardest part for me is when they get in my hair! Zachary was wearing my veil so my head was uncovered. You can see in the picture above several landed on Rod. Luckily the only one of us that got stung was Drake, the pup. We figured it was because he is black and looks like a bear cub. Although maybe it's because he put his snout right into the box of bees!  Poor Drake!

Three days after we installed the bees, I went back down to open the hive and check to make certain the queen had been released.  Both of the marshmallows were gone and the queen was out of the tiny box!  I know she's in the hive somewhere.  In about two weeks I will go back down and inspect the hive to make certain the worker bees are forming comb and the queen is laying larva. In the meanwhile, I am helping them out by giving them sugar water. Although luckily for the bees our cherry trees and plum tree are in full bloom right next to the hives.  They don't have to go far right now to find pollen. 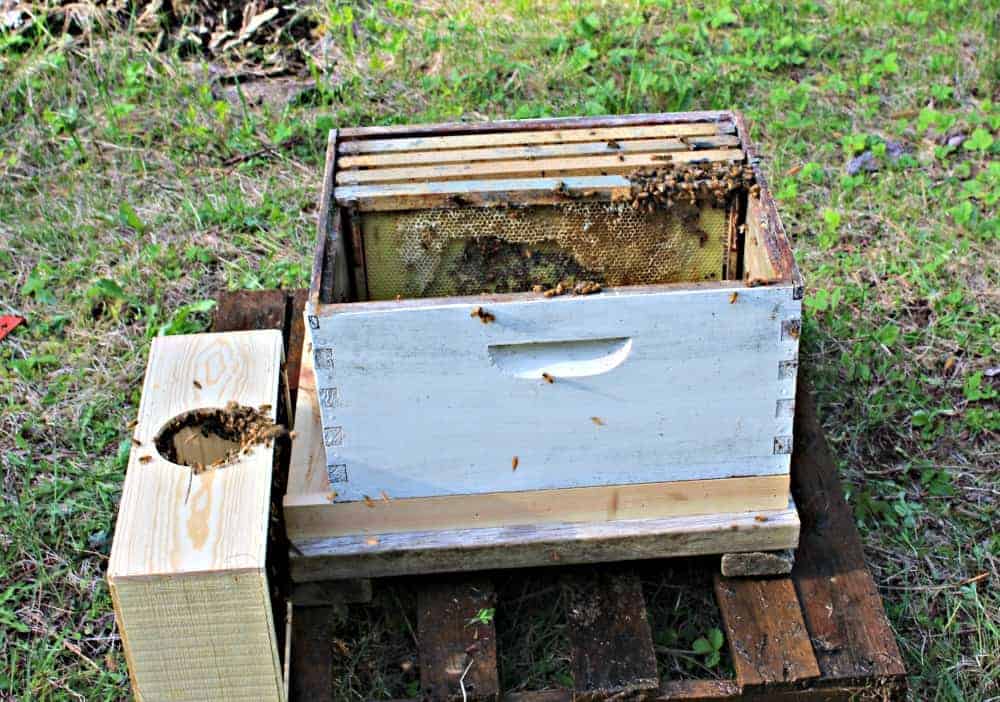 With any luck and success we will be harvesting honey in no time at all!