When we moved from town to our current place in the country 9 years ago, I told my husband let's get honey bees!  He replied, "You mean, you want me to get honey bees and  me to take care of them, and you want to watch and enjoy the bees!"  Why yes, that is exactly what I meant. 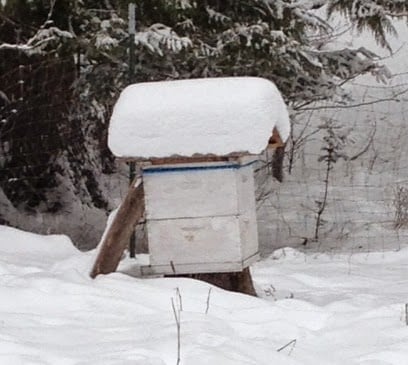 I finally came to the realization, that I could be in charge of the bees.  Last Christmas, Rod gave me several items to start bees: a brood box, a hat and veil, gloves as well as other items.  In the spring, I picked up a package of honey bees and the adventure began!

There are a lot of different theories on the correct manner to raise and care for bees.  I read as much as I could, talked to local experts, took a bee keeping class at my local co-op and then make my decisions based on all that information.  I still have a lot to learn.

Putting the bees into their new home was fairly uneventful.  The bees were  sedate and were hovering around their queen trying to free her.  After one week I checked to see if everyone had settled in and it all looked good. I thought to myself, "This bee keeping stuff is a piece of cake!"  I should have known better!

We've had several near mishaps, but the bees seem to still be hanging around.  Hopefully if we can make it to spring, I can expand my hives and be on my way to honey!

Our first near disaster was near the end of July.  I was standing on our deck looking down at the garden.  Suddenly the entire space above the hive filled with bees.  They were just everywhere.  I called the kids out and we stared at the bees.  This was something new and we didn't know what was happening.  Just as suddenly, all the bees flew up to the very tippy top of a nearby tree.  They had swarmed!  "Nooooooo, Come Back," I pleaded!  I ran down to the hive and there were still bees there.  Only half the hive had swarmed!  I was still sad, but half was better than all my bees!

Next in early September, Rod had come home early.  He went down to the garden and noticed the hive was completely knocked over!  A bear had climbed the fence and knocked the hive down!  Rod quickly put on the bee suit and righted the hive.  The bees were sooo angry.  Luckily he walked away with only one sting and it didn't appear that the bear had done much damage to the hive.

Yesterday, I decided to check on my bees because the temperature had raised to 38 degrees.  As I tromped through the snow I started to notice a sprinkling of dead bees across the snow.  The sprinkling became thicker the closer I got to the hive.  Outside the hive was a small pile of dead bees.  I was expecting the pile outside the hive's front door.  Bees die off throughout the winter and when the other bees clean house, they sweep them out the door.  I was a bit panicked with the bees that had obviously left the hive on their own, attempted to fly and then landed on the snow and died.  I HAD to open the hive to check and make certain my babies were okay!  Once I got the lid off, I heard a buzzing down below.  I quickly put the lid back on, not wanting to disturb them any more.  All is okay for now...

Oh if we can make it to spring with bees still alive in the hive, I will be one happy girl!