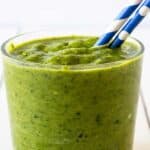 Healthy Green Smoothie made with spinach, kale and fruit. This fun colored smoothie is sweetened naturally from the fruit and has a big dose of nutrients from the kale and spinach. 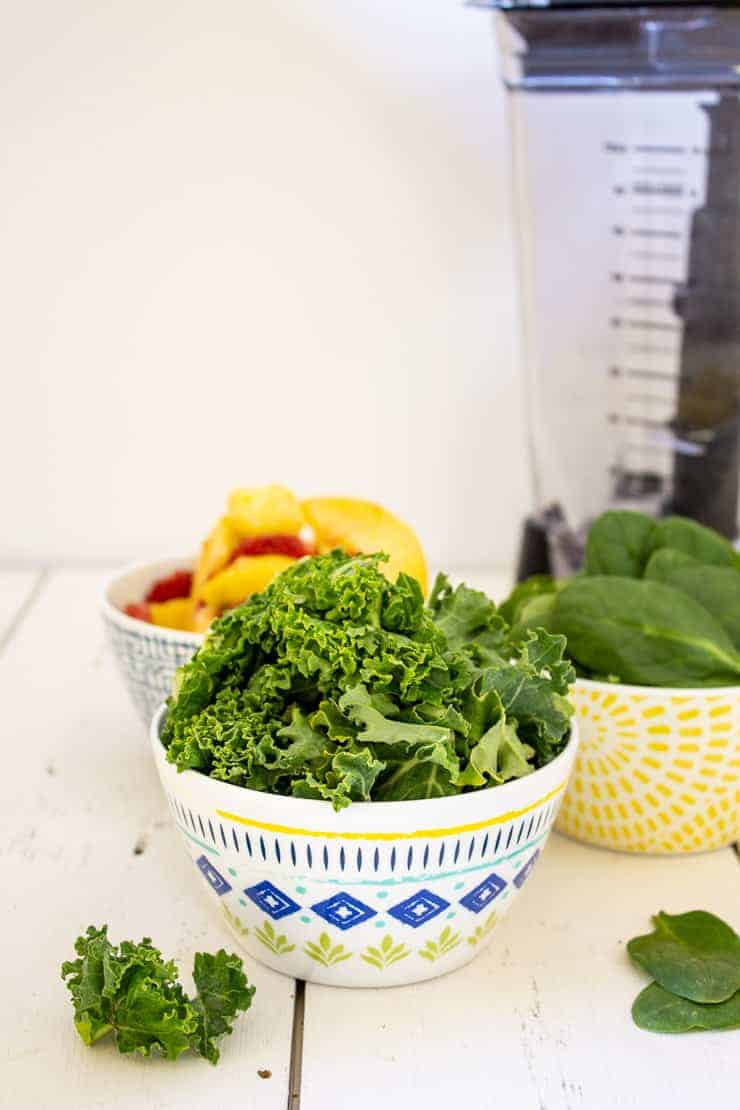 On any given day in my house you can hear the whirl of the blender with someone making a smoothie. Often it's a fruit and veggie smoothie, but our newest smoothie is becoming a fast favorite - The Green Smoothie!

Green Smoothies are nothing new, but they just aren't one that we've favored. In all honesty, I think it's the color that has turned everyone off. It's not fair to judge a smoothie by its color, but I believe it to be true.

The key to making a great green smoothie is make certain it tastes amazing. This recipe includes spinach and kale, frozen fruit and  a squeeze of fresh lemon juice. You might be tempted to leave out the fresh lemon juice, but don't do it! It's what makes this smoothie tastes really great.

The funny part is, you don't even taste the lemon juice. It just adds a bit of brightness that was lacking when we first tried this green concoction.

Table of Contents
What are the benefits of drinking green smoothies?
What type of fruit do I use?
Do I use fresh or frozen fruit?
How do I get my kids to drink a green smoothie?
Can I freeze this smoothie after it is made?
Other Healthy Snacks
Green Smoothie

What are the benefits of drinking green smoothies?

Spinach is high in

Kale is a very high nutrient dense food - which means it's low in calories but high in nutritional benefits. 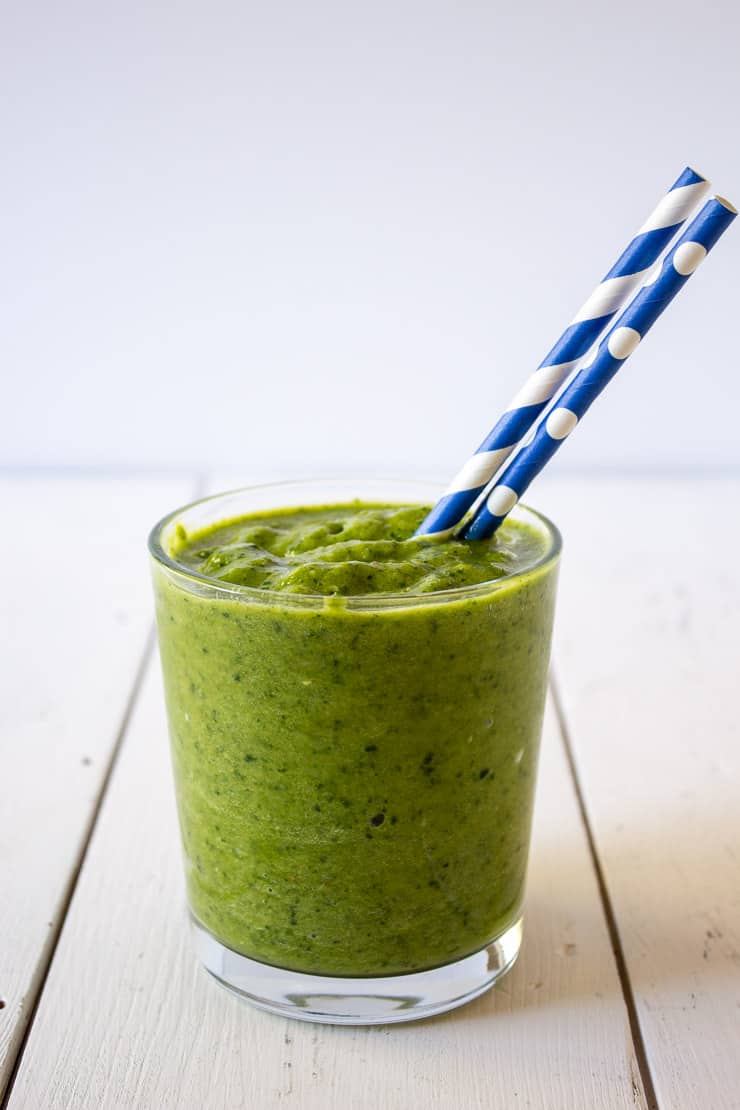 What type of fruit do I use?

I used a mixed bag of frozen fruit. It contained strawberries, peaches, pineapple and mangoes. When making this smoothie you can use any of your favorite fruit.

Do I use fresh or frozen fruit?

You can use either fresh or frozen fruit. I used frozen fruit for this recipe because I like the icy cold texture from the frozen fruit. Then frozen fruit also helps add thickness to the smoothie. When I make this with fresh fruit I will often throw in a few ice cubes to achieve that icy texture.

How do I get my kids to drink a green smoothie?

My kids are all teenagers and are now into this green smoothie. However, it wasn't long ago they wouldn't have even tried this healthy concoction. If your kiddos turn their noses up because it's green, try adding dark colored berries for your fruit. You could use blueberries, strawberries and raspberries.

Can I freeze this smoothie after it is made?

My kids love freezing their smoothies. They will often make a double batch and eat half of it right away. Then they will freeze the other half and eat it later. It becomes rock hard, but they love scraping it out of the cup with a spoon. As it melts it becomes softer. 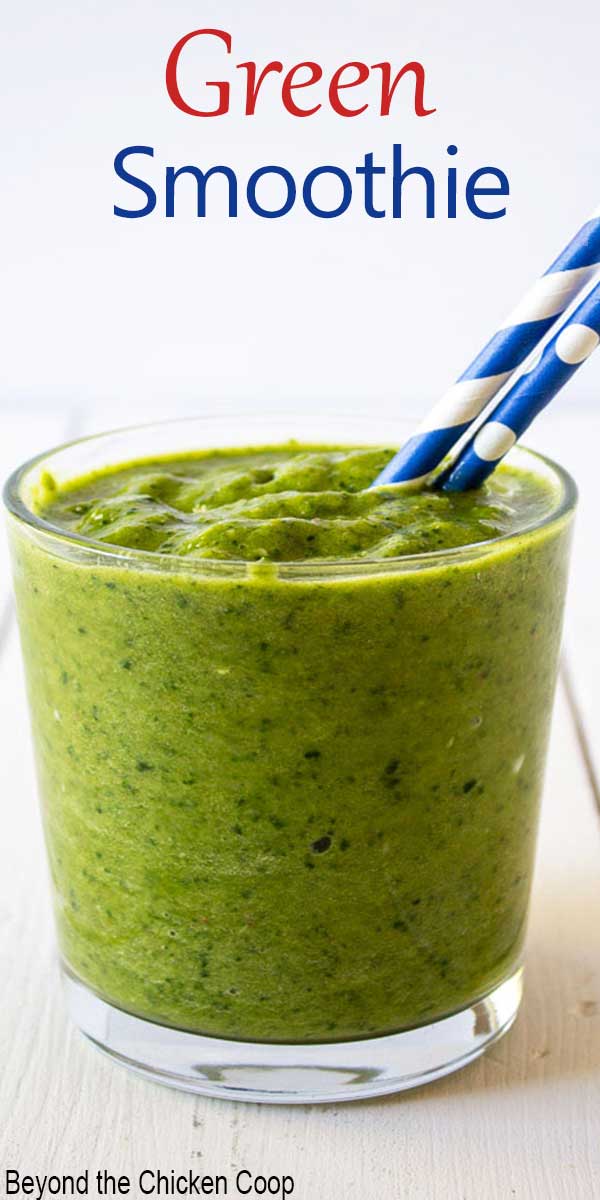 Some other healthy snacks include 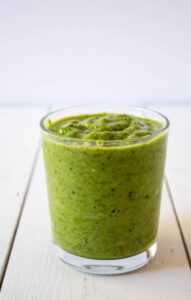