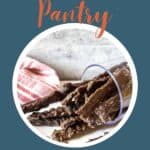 In this episode, Kathy shares a recipe for wild game jerky using ground venison or elk.

Table of Contents
Play the episode
Recipes
In this episode you'll learn:
Equipment
Where to listen to the podcast
Transcript

Hi everyone. And welcome back to the Pantry today. I am going to share a recipe with you for venison jerky. Now this recipe is pretty versatile and you can use almost any type of meat that you have. I live in a household full of hunters, which means our freezers are full of game meat. You can use venison or elk or other wild game meat.

You can also use beef in this recipe. If that's what you'd prefer.

Several years ago, we came across a tool that really changed up our jerky game. We were used to making jerky by slicing thin strips of meat, marinated it and drying it. Now we still do that process as well, but the tool that we came across is called a jerky gun and a jerky gun allowed us to use our ground meat, our burger, and turn it into jerky.

Now the jerky gun looks like. Hmm. So if you were redoing your house and you needed to fill in cracks with silicone along your shower stall, and to stop the water from leaking out, you would use a caulk gun, put that caulk in, and then to squeeze that silicone out. The jerky gun looks very similar to that.

Except in where you put the caulk, instead of putting the caulk tube in there, you put the burger in there and then you literally squeeze that trigger. Just like you'd find on that caulk gun and out the other and out of a tube comes the burger in nice even thin strips. Game changer. Let me tell you, we make a lot of jerky this way.

It's easy. We use up so much burger that we have that we always have in excess. And one thing that we like about this too, is the sometimes jerky can be tough just from the sinew and the meat and this because it's made of burger is really easy to bite and chew. If you've never seen a jerky gun before I have pictures and a full description on my website with the recipe for venison jerky, you'll want to check it out and really see if this is something you might wanna use too. Trust me. It's a game changer.

Now, play around with this recipe a bit. If you need to, if you want to leave the whiskey out, that's okay. If you want to double the whiskey that's okay, too. So you're first gonna put all of the marinade ingredients in a small pot and just heat it up so that the brown sugar dissolves, you're not going to boil it or anything else just heated enough so that that's fully dissolved, then let it cool.

Once it's cooled, you're going to pour it over your ground venison, or your ground burger. Then you need to use your hands. No other tools really going to do the job. So get both hands clean and just dive them right into that burger and start mixing that marinade completely and totally into the burger.

And you're just gonna fill up as many trays as it takes. Once you have used up all of your burger, then you're going to set your dehydrate on between 145 to 165 degrees. And it's gonna take anywhere from six to eight hours. The time is going to vary depending on how much jerky you have on there, how moist it is, the humidity level of your outside temperature.

There's always going to be some variance in there. You want to get your jerky nice and dry. Ideally, you want your temperature, the internal temperature of your jerky to reach 160 degrees Fahrenheit. It is a little challenging to measure those thin strips, but that is the safe temperature for your jerky to.

If it's going to be stored for any longer than that, you really should refrigerate. Or freeze your jerky so that it's safe. When we freeze our jerky, we put it in the zip top bags or in vacuum sealed bags and we put it in our deep freeze and just pull out bags whenever we're ready to, to eat it. This is such a great recipe.

I hope that you enjoy this and give this a try. We'll see you next week in the pantry. Bye everyone.

Thanks for listening. And be sure to tune in again next week for more episodes of Preserving the Pantry.